Investors can use Fibonacci ratios in predicting future price movements. The ratios are derived from the Fibonacci series, which were named after an Italian mathematician named Leonardo Fibonacci who lived around 13th century AD.

In technical analysis, the golden ratios are typically translated into different percentages: 38.2 percent, 50 percent, 61.8 percent, etc. These ratios are used by the investors in determining the support and resistance levels, also known as retracement levels.

In this article, I will tell about how you can use the Fibonacci ratios to determine both the support and resistance levels.

Fibonacci ratios can be represented by horizontal lines (or zones if you have our PFAZoneSuite) in a historical price chart. The lines are drawn at the key Fibonacci levels i.e. 23.6 percent, 38.2 percent, 50 percent, 61.8 percent, 78.6 percent and so on. 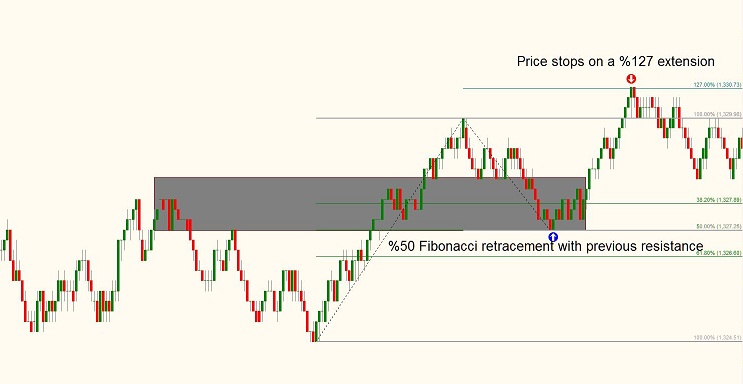 So, how do you create the Fibonacci levels in the chart? It’s simple.

First, you must draw a trend line at the high and low levels, and then divide the vertical distance by the Fibonacci ratios. However, you normally won’t have to draw the lines. Your trading platform should automatically draw the lines on the chart.

Now the question arises, where should you set the support and resistance levels? Again, the answer is simple. You must look at the past to find the ideal levels.

Suppose that from looking at the price chart, you find that in the past two months, the prices tend to remain above the 38.2 percent level. So, this can become your support level. The Fibonacci level above this level will become your resistance level.

You can repeat the same process in the downward sloping trend as well. The main point is that you should look for price levels in the past to determine the support and resistance levels.

The premise of the Fibonacci retracement level is that the past values tend to be a good predictor of the future values. Previous levels are a good predictor because most of the other traders would also be eyeing these levels like a hawk. So, there are higher chances of a profitable trade, if you incorporate these levels into your buy or sell trade.

No comments made yet. Be the first to submit a comment

What is Inflation and How Does it Affect the Financial Markets?

The Differences Between Mutual Funds and Hedge Funds

Trading With the Algorithms, What We See Without Emotions

Why Cash should be a Part of Every Portfolio?